With the Federal Communications Commission’s (FCC) recent proposal to make available 150 MHz of shared spectrum in the 3.5 GHz band (3550-3700 MHz) heavily devoted to indoor wireless using small cells with associated network and database technologies, the groundwork for widespread deployment of small cell technologies and innovation in wireless technologies is accelerating.

Today, the Shared Spectrum proposed rules rely on measuring and transferring to an SAS1 entity precise 3D GPS coordinate for each Small Cell installed inside a building. However, there is a missing piece: the level of RF power that transfers out of the building, by each cell, and in each direction.

Every building presents a unique 3D loss profile primarily a function of the building’s exterior materials. Further, every Small Cell will emit a unique RF energy pattern radiating out from the building. Together these form the major loss variables to determine whether legacy systems (in the 3 GHz band, primarily coastal maritime or aviation radar services) will be affected. Building loss variations can be significant which is why exclusion zones are set today on the order of 100km or more and in some places, can encircle the entire US coastline. The iPosi Solution: A 3D Containment Loss Vector Array to Each Cell

Each installed cell presents a unique loss profile. Fortunately, GPS and GNSS signals provide a tomographic profile or image. This profile forms a hemispherical vector array based on differentially sensing losses incurred by penetrating waves at known incoming directions through interior and exterior building structural elements. Using this method, each measured cell building containment loss array can then be added to the as-if-outdoor 3D cell coordinate, a 3D location also supplied by iPosi’s embedded technology along with fine time synchronization.

Alternate proposals include deployed wide area, wideband sensor networks. Beside their expense and aesthetic compromise along US coastlines, these can never be placed at enough points and elevations to capture and mitigate the impact tens of thousands or more high density urban cells would have. 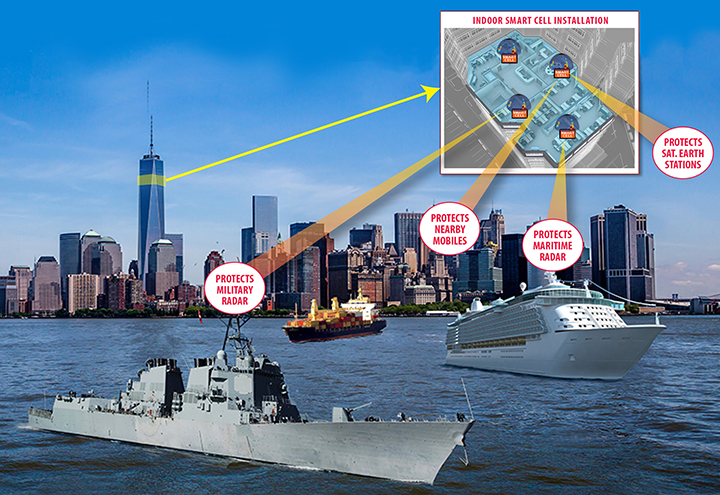 1Spectrum Access System, an intelligent server that assigns radio transmission rights periodically or on demand to each cell based on its 3D position and if measured, the RF loss from its installation point inside the building.

2Based on the most recent mobile spectrum auction, AWS-3 during late 2014, the value per MHz-POP averaged $2.62 for 1695 -1800 pared and unpaired spectrum. This is applied to up to 1000 MHz proposed by the PCAST Presidential commission on spectrum acknowledged by the FCC. Even discounting these auction values by 50 for conditional shared use translates to $200-$400B value.